Two key members of President Trump’s and the White House’s Legal Teams discuss what will or won’t be made public in the Mueller Report. The panel discussed the growing PR role of lawyers as spokespeople and whether it puts brands at risk. They addressed the key legal issues facing organizations including cyber security, privacy and how to navigate them. 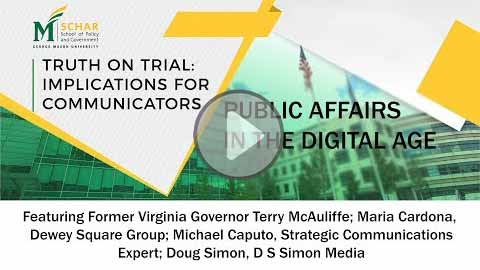 Can a Centrist Become President in Our Polarized Time?

Amazon pulling out of New York City is just one challenge brands face from the political divide. What can PR People learn from political strategists and politicians, who are in the cauldron of the political divide, about navigating the current polarization? Judging by this panel, quite a lot. You’ll gain insights into challenges faced by PR pros engaging in political strategy at the highest level. We also asked each panelist about their plans(?) to run for President.

The panel took place at the Schar School of Policy and Government on February 26 during “Truth on Trial”, the third in a series of events looking to grow our understanding of messaging in the digital age. The “Public Affairs in the Digital Age” section featured former Virginia Governor Terry McAuliffe, Maria Cardona, Dewey Square Group, and Michael Caputo, Strategic Communications Expert. 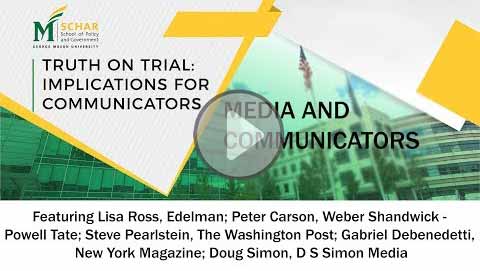 Why Have CEOs Stopped Talking to the Media? Experts Say It Is Time for Change.

A panel featuring public relations specialists and members of the media revealed a common trend: organizations aren’t doing enough to build relations with media. Reporters are being ignored or tossed low-level individuals, and companies reapproach only when they have a calculated story. Similarly, due to financial media cutbacks, reporters don’t have time to get to know the key players in the industries they cover. This dynamic only further fractures the public’s faith in both sides. A solution that some panelists seem to favor: CEOs need to talk more to the media, to build a genuine relationship and improve understanding, both ways.